Last night with the able assistance of John M0UKD we attempted an entry in the 160m club calls contest. As the name suggests this is a 160m contest, designed for clubs to have teams of members on air. The exchange is a little strange, RST, Serial, (member, Club HQ or non club) and then 4 letters for your club HAVE (for Havering). The rules and contest exchange are available here for further reading.

As you may recall, Saturday night was heavy rain. The forecast suggested it would be very windy and a little wet, it was in fact very wet and not windy. Our nominated operating position was grass based, and we soon took the view this would be less than desirable. Not only was the car likely to get stuck, but the prospect of getting muddy and wet before even starting! 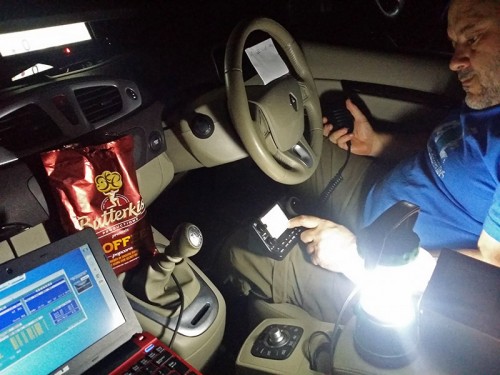 We decided to use plan B, a tarmacked location with access to put up a large doublet. The plan was to use my 18m roach pole and a dipole / doublet  (2 x 40m) fed with 300 Ohm feeder.

After the initial “what the hell are we doing moment”  we decided to brave the rain, and was set up for around 20 mins late (around 8.20). In the process of setting up a local farmer came over to check we wasn’t trying to install a new caravan based settlement close to his home. He was “reassured” to see it was just some blokes with a very large pole. At one stage he asked “haven’t you got anywhere dry to do that” ….. A good question, well presented….”no”.

The next challenge was logging, we opted for SD and the first attempt caused much swearing. The exchange is not standard, and while the program should take this into account… lets just say it caused some stress.

The contest lasted for 3 hrs, and topband was very busy. At times it was hard to find a space to call CQ, and we had quickly worked 30-40 in the first hour. In the end we worked 69, not bad considering we had a very high noise level (s9) and I have no doubt we had people calling that we just couldn’t hear.  Not sure why that was, only one local farm but who knows, even poor farmers have Range Rovers and plasma TV these days…