FSQ is a Fast Simple Qso chat mode, a bit like chatting by SMS or Skype but of course using RF. The FSQCALL protocol was developed by Murray ZL1BPU with significant input from Con ZL2AFP. Murray suggests all the hard work was done by Con 🙂

FSQ is intended for fixed frequency (channelized) operation, with dedicated calling frequencies. It isn’t intended as a ‘tune around to see what you can find’ mode!

You can read more about FSQ and the way it can generate automatic replies from station monitoring the frequency. You will need to understand how the commands work.

To help you get started have a read at the operating guidelines published here. They establish some rules around callsign format being in lower case and what frequencies to try. One option for inter G is to try 5 MHz, put your dial freq on 5367.5 USB and call CQ.

FSQ was developed by Con Wassilieff ZL2AFP with the assistance of Murray Greenman ZL1BPU. The first QSO took place between these two on 28th November 2014, and the first Alpha executable release was on 17th December 2014. The source code was released with the Beta version 0.23 on 3rd March 2015. The first US version release (V0.24 RC1 by Bob NW8L) was on 29th March 2015. The first full-package public release was by Bob NW8L on 29 April 2015.

A version of fldigi with full FSQ support was released by Dave W1HKJ on 16 July 2015, and includes support for Linux and Mac platforms.

More information on FSQ and fldigi is available online.

The software requires very little setup, just add your callsign (lower case) and locator. You may need to use VOX to key the radio, much depends on your local setup. 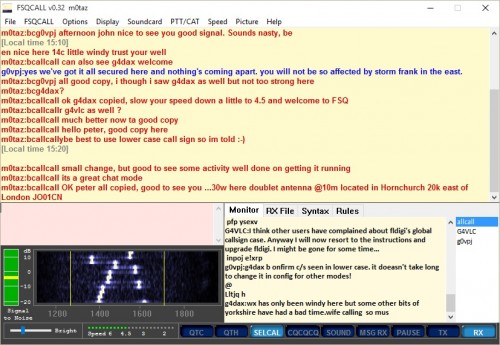