On the 2nd November 2019 we completed a new amateur radio rally / convention in Zwollle in the Netherlands.

Travel was via the Hook of Holland Ferry, and the fun began right from the start. I collected Dave G7UVW and we headed up the A12 towards Harwich, leaving a lot of time for any unforeseen issues. That was rather fortunate, as the first issues was a 4 car accident on the A12, a 45 minute delay.

Once cleared we made good progress, right up until some clown decided to close the A120, the main route into the Harwich port from the A12 for roadworks. They had organised a diversion, although it soon became apparent the route was long, complicated and involved country lanes!

The only thing to do, find that Carpenters album on the music system and try and relax. Very, very stressful, and we had left lots of time and we now only had 45 minutes to make the port before boarding closed.

GPS Track from the car

It should be easy to spot on the map the point that the A120 stopped and the diversion began.

Honestly, who in their right mind would close the main route into one of the largest ports in Essex! The journey should have taken 75 minutes, but was more like 2.5 Hrs.

We made it onto the ship, and decide to head down to the bar for a well deserved beer. The crossing was an overnight sailing, getting into Holland around 8 am the next morning.

The drive from the Hook of Holland to Zwolle was completed by George M1GEO, and was around 1hr 30 (around 100 miles) and traffic was light.

The rally was well attended, we arrived around 1030 am and needed to queue for around 15 minutes for entry. Entrance was 9 EU, and the hall was large and stalls well spaced to avoid congestion.

Lots to see, and a good selection of pre-loved equipment, and some new items. The catering on site was good, if a little expensive, I did see quite a few people well prepared with flasks and sandwiches in true radio amateur style.

The Dutch version of Raynet (DARES) had a nice vehicle on display, complete with a telescopic mast.

The return journey was back onto via the Hook of Holland and onto the ship. We had a 3 course meal book, and the standard of food online was excellent once again.

A very busy, but great fun weekend. Its always nice to catch up with radio friends and the rally is a great way to do that.

This year I attended for the first time the Dutch National rally in Rosmalen. George M1GEO, Chris G8OCV, Dave G7UVW, Peter G0IAP and myself left via Harwich ferry port for the overnight crossing. The ferry journey was excellent, with a full English breakfast to set you up for the day. 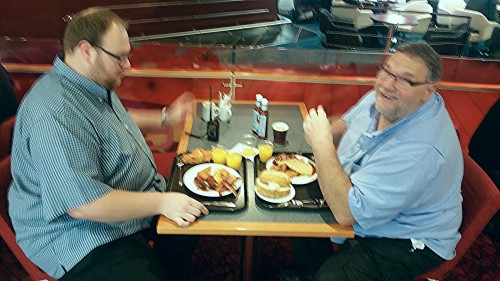 The rally is located in a large hall, with all the stands in one single location. The space also has an elevated section, with a number of traders selling from the balcony.

The rally and flea market is mostly populated with previously owned equipment and parts, with a wide selection of new and second hand components. Here is a view inside the hall. The rally was very well attended with thousands of amateurs from the Netherlands and beyond.

Although the hall was in the main filled with second hand and components sellers you could find some new equipment on sale, including a working display model of the IC7300 at  the Hamshop NL. 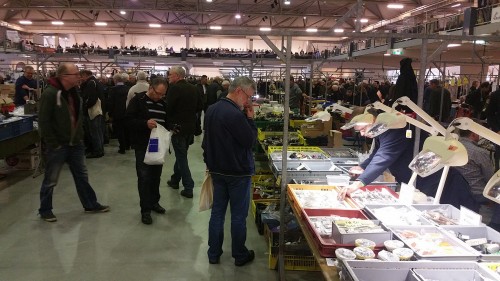 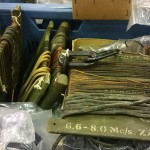 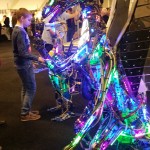 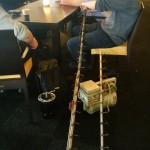 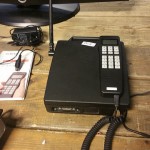 Here are a selection of pictures from around the site. Dave G7UVW purchased a very nice large 23cm aerial that needed a new home.

No rally would be complete without a stop for refreshments, and Rosmalen has a good selection of fast and not so fast food. I selected a healthy fruit based snack. 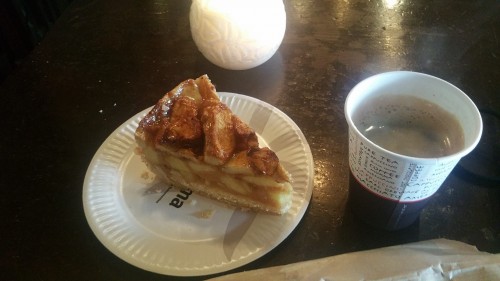 I purchased a waterproof / outdoor mounting box and some antenna hardware. As one amateur said to me, i’ve had fun and purchased more than my entrance fee! It was much busier than I expected, and the scale and attendance was much better than anything I have seen in the UK. Thanks to George M1GEO who completed the driving and aunty Google for her navigation. On the route home we even had time for a 3 course dinner and a beer on the overnight ferry. 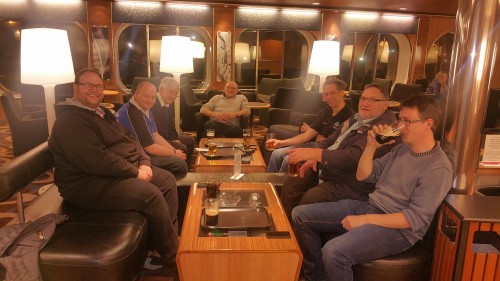 Here you can see us sharing a drink with the some of the  Cambridge Hams, Gavin M1BXF, Rob M0VFC and Martin G3ZAY.